Below the glacier we find the bedrock, consisting mostly of gneiss, commonly known as “gråstein” translating to ‘grey rock’. The bedrock may seem grey and boring to the untrained eye, but the story of how it got here is thrilling!

The bedrock here is over a billion years old in some places! Over the course of this period, the bedrock has been moved over long distances, kneaded, and formed like a bread dough by immense powers from the earth’s inner parts. The sum of these processes has produced the beautiful patterns on the bedrock that we see today. 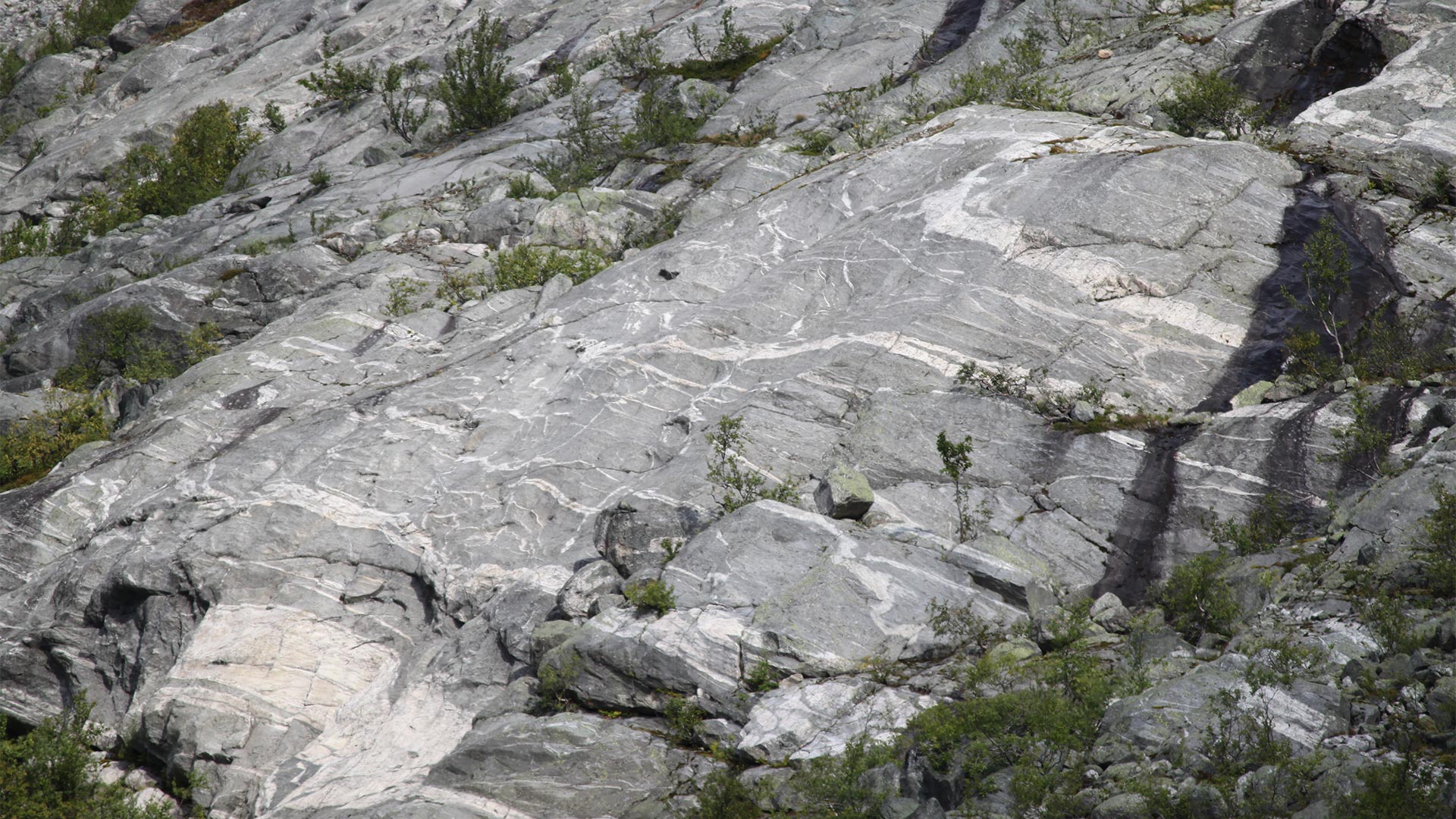 Glaciers are formed when the snow fall during winter is greater than what melts off during summer. It can be cold, cloudy, and windy on the glacier while conditions at the same time are warm, sunny, and calm down in the valleys. The characteristic cracks or crevasses you can see in the ice are created because the glacier ice is constantly moving, like a thick river of ice, and gravity is constantly forcing the ice downwards. 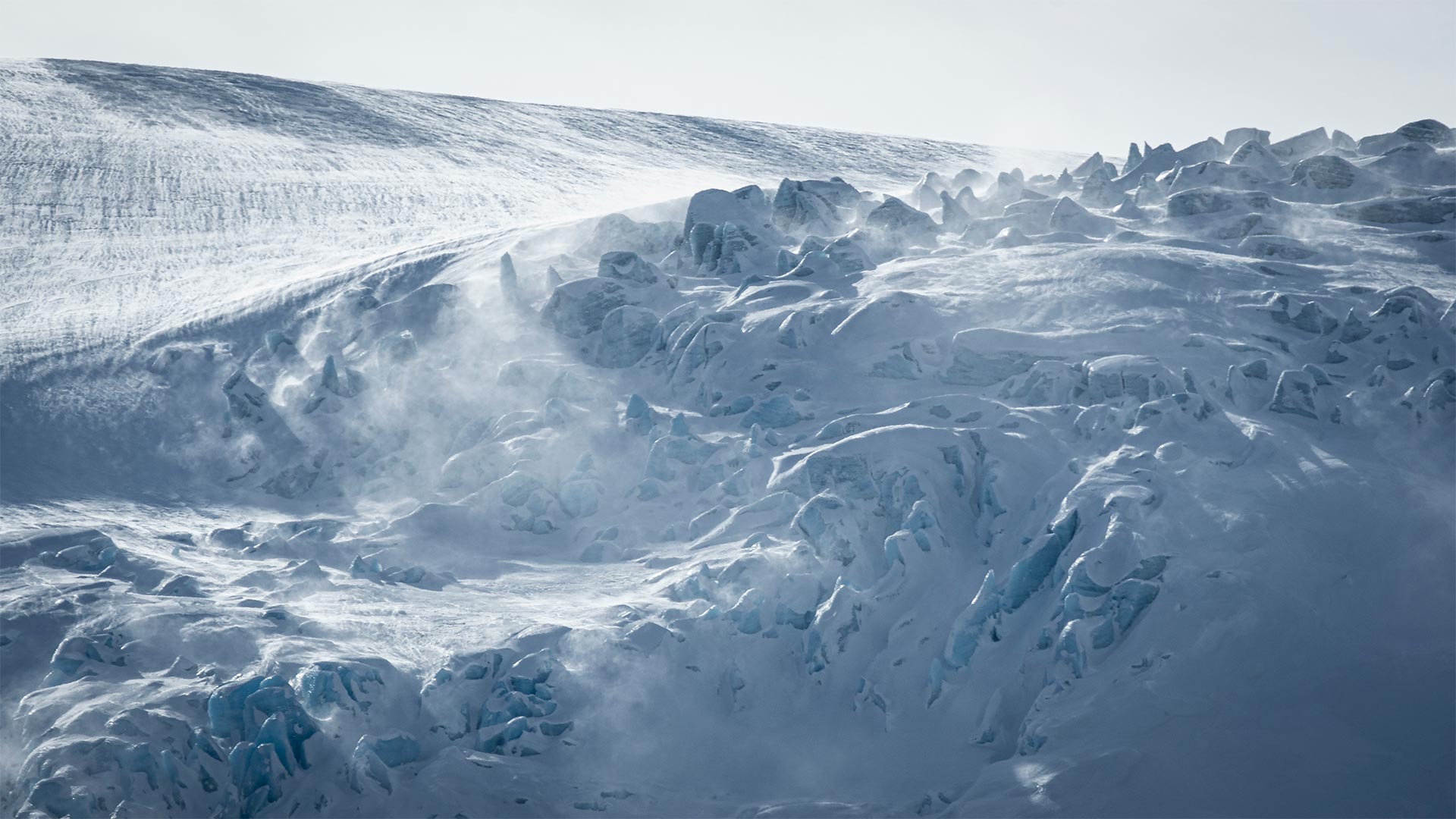 Has the Jostedalsbreen glacier existed since the Last Ice Age?

The Last Ice Age ended 11 700 years ago. Scientists have found that Jostedalsbreen, like all the other glaciers in Norway, was melted away completely during a warm period between 8000 to 5000 years ago. After this period, it got colder and there was enough snow that survived the summers, and so the glacier again grew.

During «the Little Ice Age», a cold period from approximately 1300 to 1850, the glacier was at its largest since the last Ice Age ended. The terminal moraines that show the glacier’s extent during this period are the outermost moraine ridges we can see in the valleys around Jostedalsbreen. Most of them were formed around the year 1750. The Little Ice Age wasn’t an actual Ice Age, but a cold period where there was an increase in natural hazards such as avalanches, in addition to crop failures and famine for those who lived close by the glacier. At several sites, farms and farmland were destroyed due to the advancing glaciers: The ice masses of Brenndalsbreen calved down on the Tungøyane farm in the Oldedalen valley, and Nigardsbreen overran and destroyed the farm Nigard. 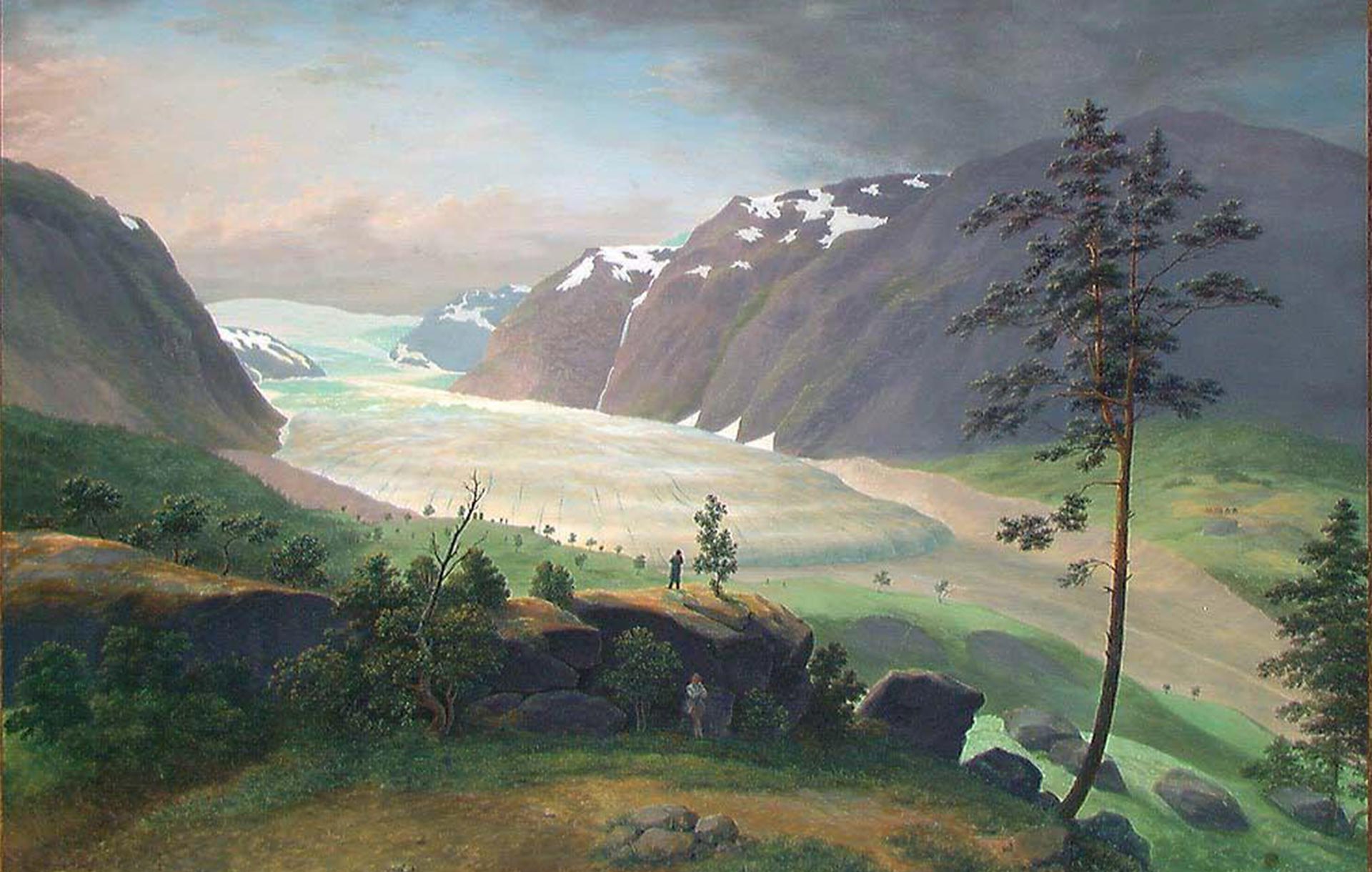 U-shaped valleys, moraines, scoured mountainsides, outwash plains, taluses and steep mountainsides where avalanches, rockslides or mudslides occur – water and ice have shaped a constantly changing landscape for long times. The glaciers and the glacial meltwater have formed geologically interesting formations, which are a part of the national parks’ regulations and, therefore, important to preserve. Fåbergstølsgrandane is the largest active outwash plain in Norway and a very interesting spot for studying the development of the vegetation and the constantly changing course of the glacial river. 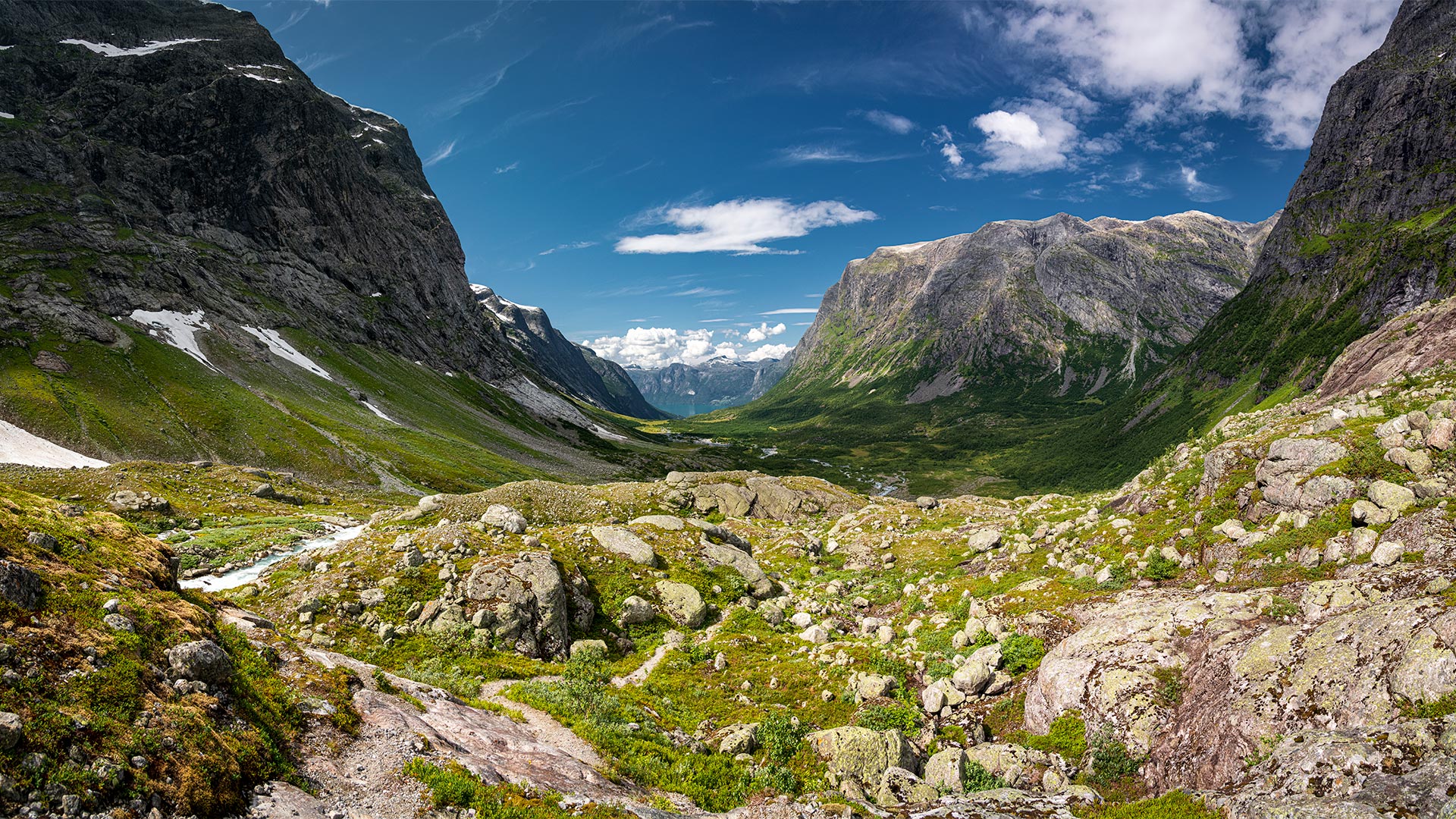 When the glaciers retreat after periods of advance, like after the large glacial extent during «the Little Ice Age», there have also been periods when the glacier front experienced still-stands or even smaller advances. During such a period, the glacier could produce several moraine ridges. These «snapshots» of how far and wide the glacier extent was at previous times makes the landscape exciting to decipher for those aware of how large the glaciers used to be. The closer to the glacier you are, the younger the moraine ridges are. Maybe you have some young detectives in your group that can track the different stages of glacial extent up-valley?

The Great Flood and divine retribution?

In many areas in the national park, and especially in high-altitude parts, you may come across large boulders that seem to have been “misplaced” – and it is often of a different type of rock than the surrounding. Earlier explanations for these finds claimed that the Great Flood had lifted the boulders to their current height. Today, we know that the ice sheet that covered all of Norway during the Last Ice Age carried these boulders, also called glacial erratics, and the boulders have stayed in place ever since the ice melted away. Therefore, we find boulders in areas that are not likely exposed for rockfall, and the boulders often «float» atop smaller rocks! 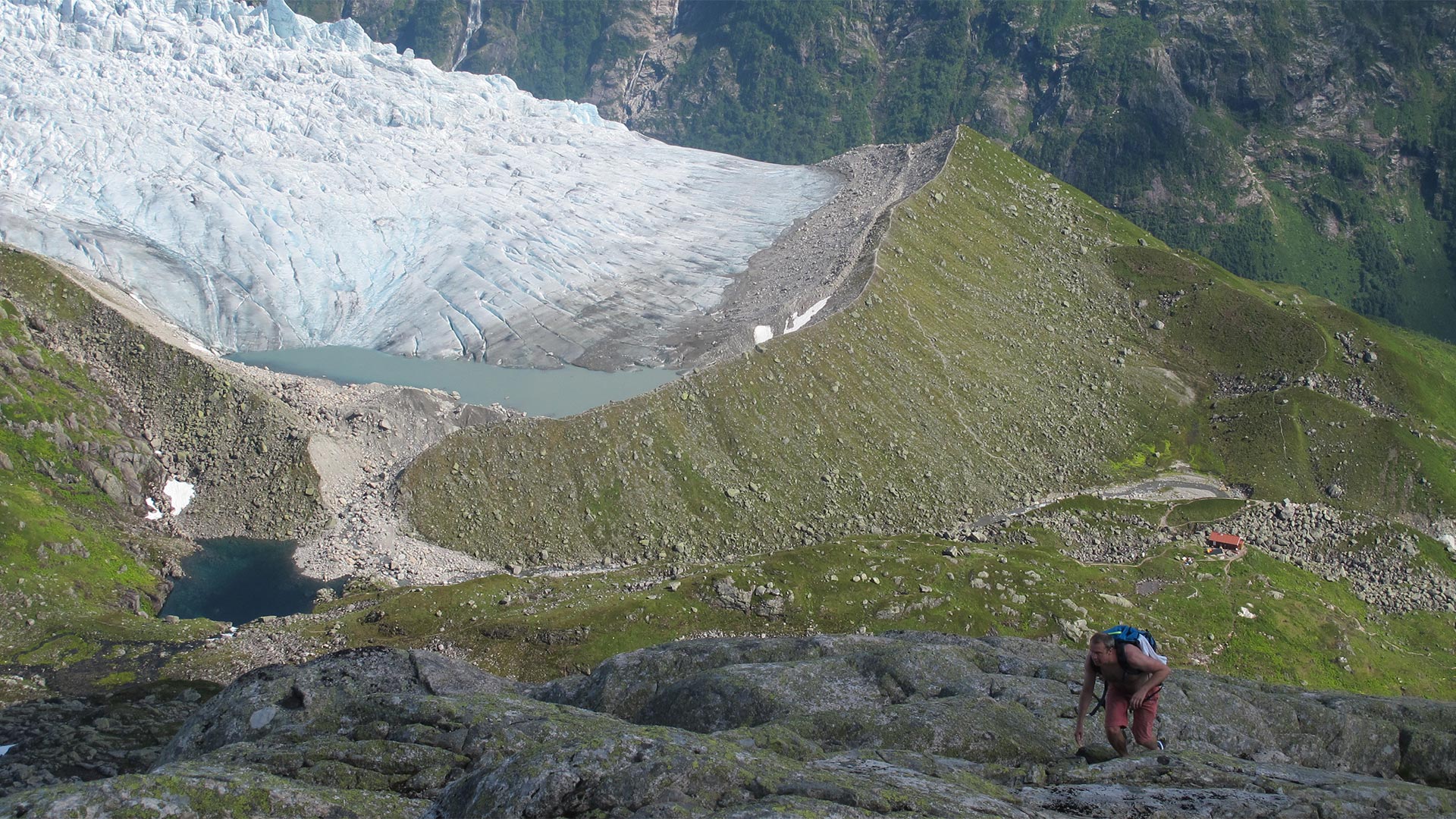 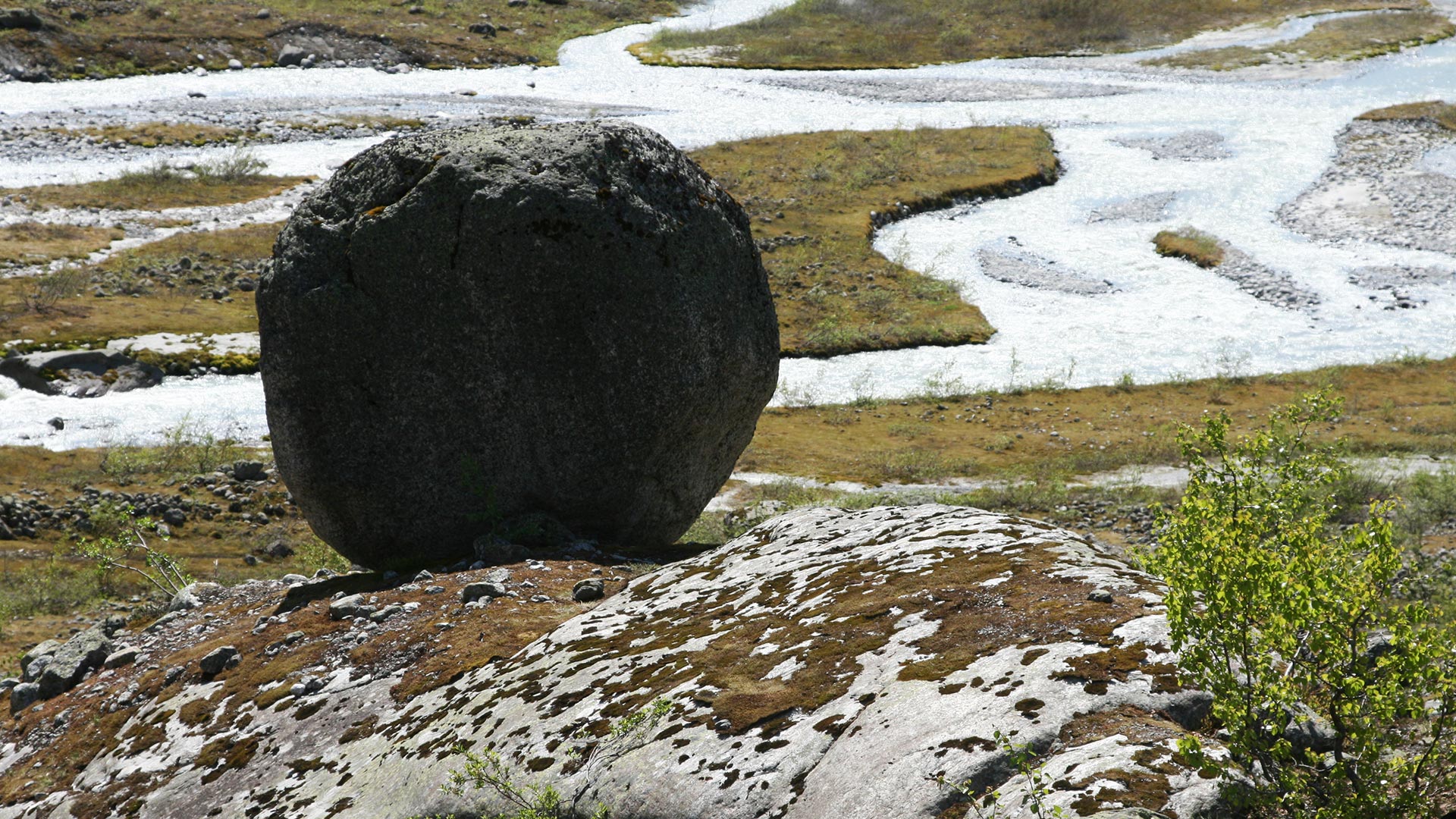 The area in the national park is characterised by an abundance of free-flowing water, and you will see small, trickling streams, high waterfalls, and boisterous rivers. Animal life needs the great variation in nature to survive. 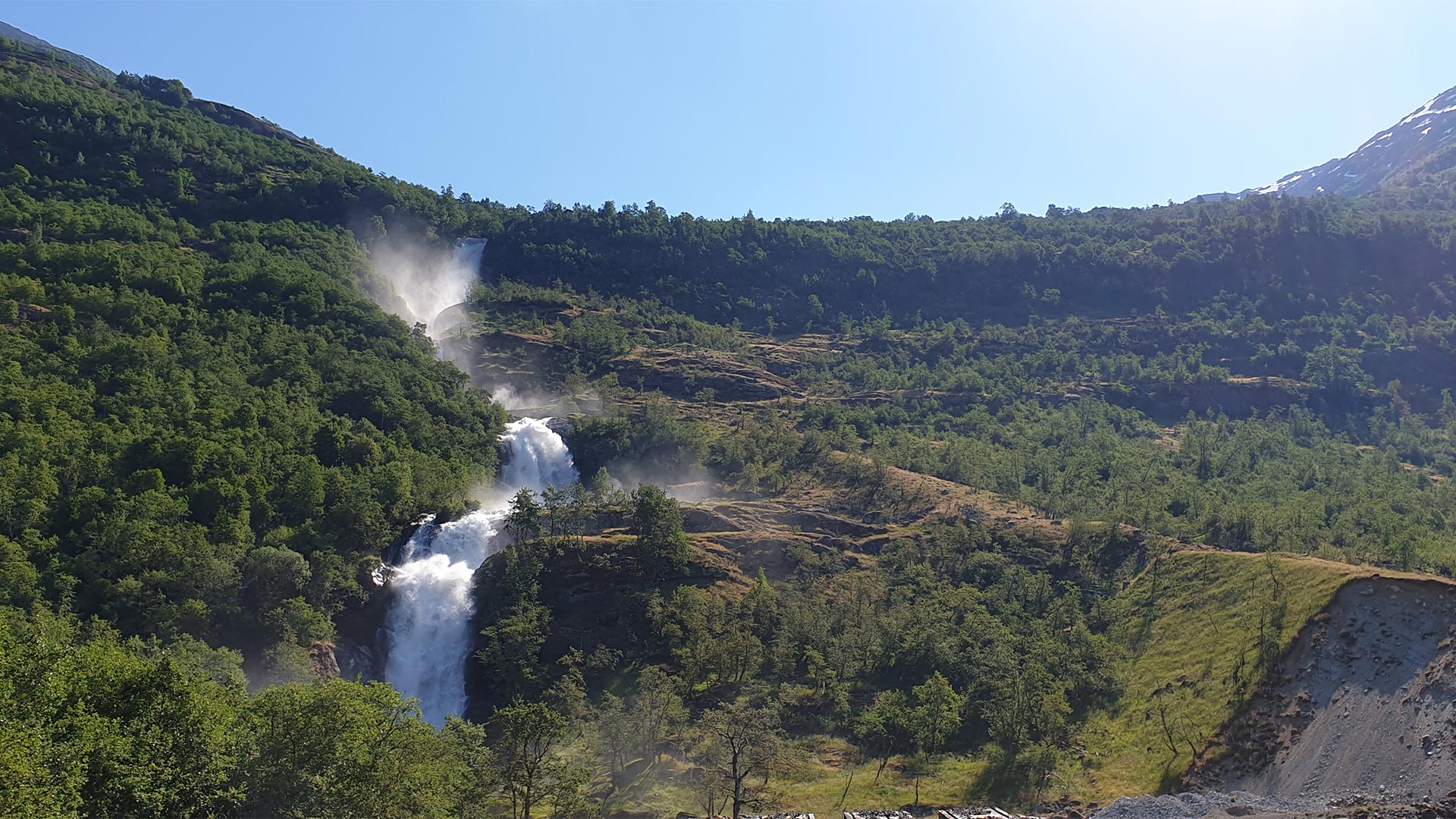 Why are the glacial rivers and lakes emerald green?

Grains of sand and gravel that freeze to the bottom of the glaciers scour the bedrock like sandpaper. This creates a fine-grained «rock flour» that is later washed away by the meltwater and ends up in the glacial rivers, lakes, and eventually the fjord. This fine-grained «flour», that geologists call silt and clay, reflects sunlight in such a way that the rivers glacier lakes appear emerald green. 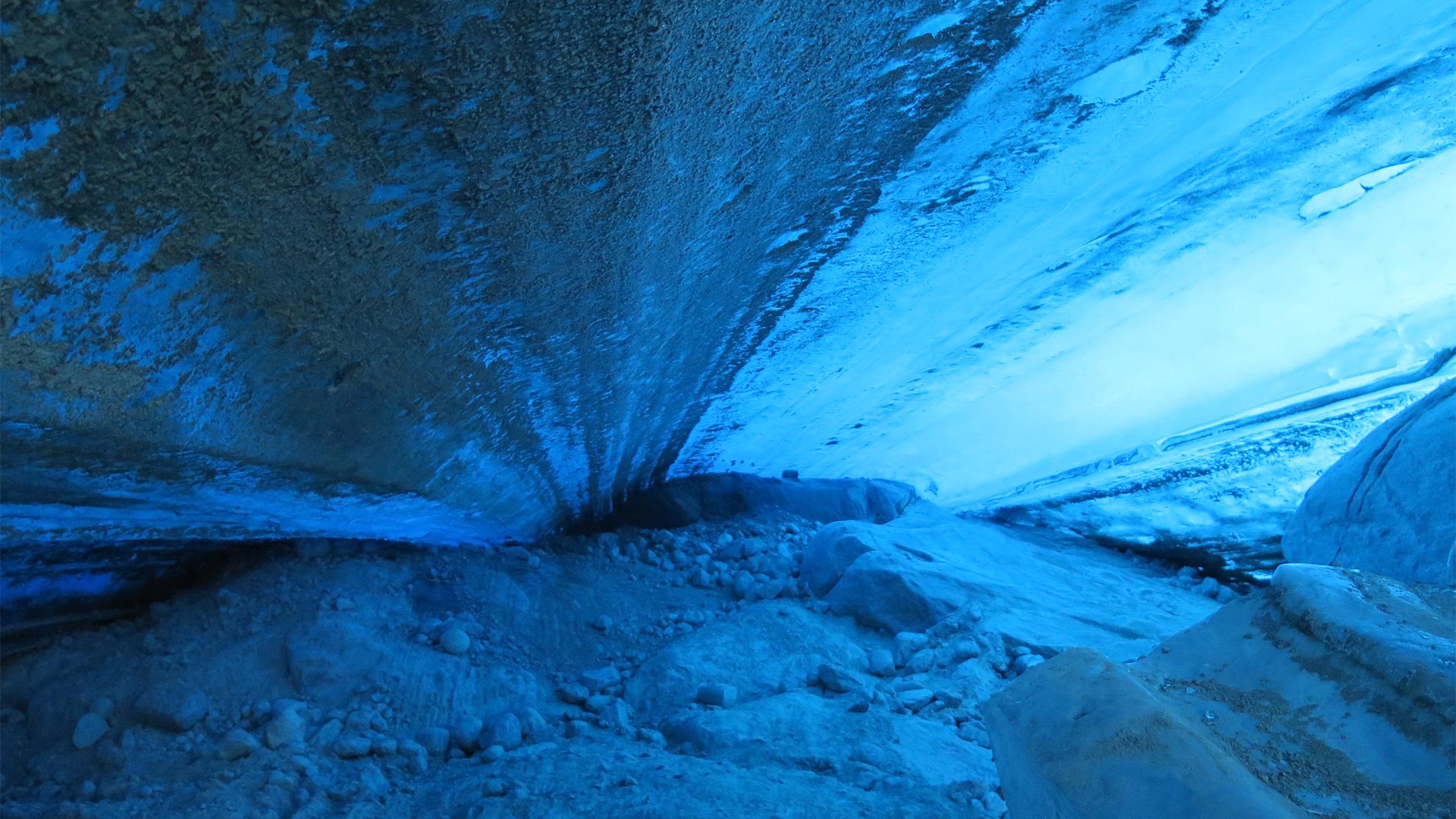